When Webb C. Ball was summoned to testify about the timekeeping discrepancies that led to the great Kipton, Ohio train wreck, in 1891, he could not have fathomed in his wildest dreams that he would go down in history as the driving force behind standardizing the watch industry worldwide, nor that his dream would live 115 years later.

Mr. Ball was, without a doubt an innovator, a salesman and self-promoter. He served the public well in Ohio – selling gold, silverware, jewelry, clocks and diamonds from his little store near the railroad tracks in Cleveland. But mostly he sold watches. And his watches kept excellent time. And he was known throughout Ohio as a man who could fix just about any watch – and that these watches always seemed to be able to be counted on.

He was, by most accounts, a genius. So when poor timekeeping and un-standardized time was blamed for the great Kipton train wreck, which occurred in April of 1891 – killing 8 people, Mr. Ball was called into action.

Soon, standardization was in place throughout the USA and “Railroad Time” became the standard. Watch companies such as Howard, Waltham, Elgin, Hamilton, Hampden and Vacheron & Constantin worked with Mr. Ball and his new company, “Ball Watch Company,” providing him with movements that he then standardized and upgraded to Railroad standards and that bore the name of Ball Watch Company on the outside. (Most were upgraded to sapphire pallets and tuned to the finest of timekeeping capabilities.)

Waltham, Hamilton, Elgin etc., all made their own fine pocket watches for railroad service, but a Ball watch was (for almost years) considered to be “the best the Cadillac” of American Railroad watches.

It was as early as the 1950s that Ball Watch started to use the ETA movements. . .And today the tradition continues. Ball Watch Company again obtains the finest movements available and “tweaks them” at their factory in Oberbuchsiten, Switzerland to the highest standards — many receiving C.O.S.C. chronometer certificates to timekeeping standards that would boggle the mind of even that persnickety Victorian era watchmaker from Cleveland. 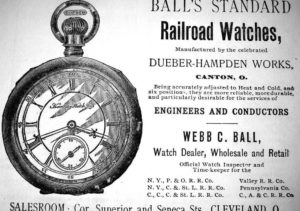 As tradition has always held at Ball Watch Company, the good stuff is on the inside. After all, their motto, “Accuracy Under Adverse Conditions” says it all. The timekeeping has always been (and continues to be) the single most important quality of their watches. But the outside of the watches is perhaps even more exciting.

New case designs at Ball Watch Company by some of the world’s top designers now ensure that those who wear the new Ball watches will not only have bragging rights as to their accuracy, but will be happy to sport one of the best looking watches with some of the most outrageous designs on the market today.

The designers at Ball are capable of thinking out of the box, in an innovative manner that mirrors the forward technical thinking of Webb C. Ball over 115 years ago. Great-looking watches with topnotch movements, capable of keeping time in the most adverse of conditions, yes, but able to impress your colleagues with incredible style as well!

Collectors of Ball watches are a very intense and passionate group and the National Association of Watch and Clock Collectors has studied the history of this great company and has archival material that covers most of Ball Watch Company’s rich history. The people at the helm of Ball Watch Company understand this and are making every effort to ensure that the legend will continue.

According to the report in this newspaper. two trains came together feet east of the Kipton depot. “A large piece of steam chest was thrown on the depot roof and rolled off.“ The article goes on to say that the concussion of the impact on the roof broke most of the depot windows

The local passenger train from the east was behind schedule and instead of waiting at Oberlin for the fast mail train to pass by from the west. went on to Kipton. A freight train was sitting on the siding that the engineer had planned to use and — going eight miles an hour by this time — sought a second siding. The mail train came around the curve from the west going forty-five miles an hour. The engineer‘s view being blocked by the freight on the siding, he did not see the passenger train in time to slow down. Both engineers and a fireman were among those killed. Three postal clerks sorting mail also died.

Most of the accounts of Webb C. Ball usually begin with the story about the collision of two trains in Kipton, Ohio. The story usually states that the engineer’s watch was four minutes slow and not knowing this, didn‘t leave enough time to get on to the siding. Some still argue about the watch being slow, but due to this wreck on the Lake Shore and Michigan Southern Railroad in Kipton. the General Superintendent of the Lake Shore Line appointed W.C. Ball as Chief Inspector to investigate timekeeping.

– W.C.Ball was :1 Cleveland jeweler and as a direct result of the collision he investigated railroad timekeeping, and finding practices woefully cient. instituted watch performance and inspection standards in 1893. Subsequently he became Chief Time Inspector for many railroads and had many American manufacturers produce a quality Railroad timekecper: the Ball Railroad Watch.

– You have probably heard or even used the old saying, “Get on the Ball.” Kipton is where it started.