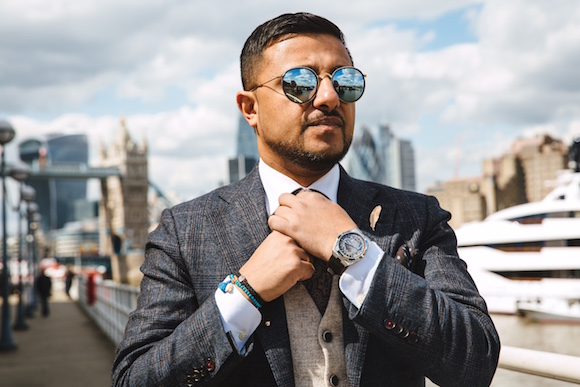 Over a million and a half people follow Anish Bhatt on Instagram. His followers spend thousands of dollars on the watches he features. Yep, @watchanish is the new face of luxury watches (even if we don’t always see his face).

Bhatt was a former pharmacology student and menswear businessman, when he quit his day job in 2011 to set up a Tumblr blog. He started his Instragram account the next year, combining a streetwise photography aesthetic with a great eye for beautiful timepieces. His images of watches are set against backdrops of sports cars, supermodels, champagne, and private jets. He shows an aspirational lifestyle representative of the watches he features.

“For me, the idea is to showcase watches to an audience of people who wouldn’t necessarily be traditional watch buyers,” Bhatt told Esquire magazine. His imprimatur—sometimes freely given, but often paid for to the tune of $1,000+ per post—can be worth big bank to a watch company. He’s reaching a young, mobile audience that previously escaped luxury watch advertising.

He’s no longer a single man gramming alone in his first-class seats. Bhatt now has over 20 editors, photographers, designers, and assistants, and homes in London and Dubai.

His watch taste generally runs large and complicated, but he can sometimes go simple. His favorite watch (of 50-60) is his 70s yellow gold Rolex Submariner.

Getting ready for those autumn heating bills in London 🍂