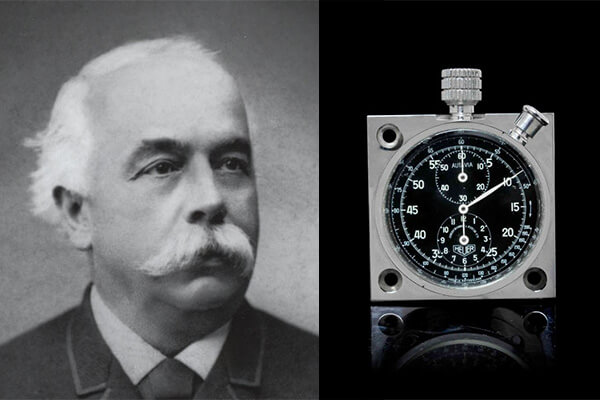 The manufacturer of the prestigious TAG Heuer Watches brand is a long one. The current entity was formed in 1985 as part of a merger between Techniques d’Avant Garde, a manufacturer of motorsport engines and aviation equipment, and the world famous watch brand. Although the focus of the group is now in watch making, it continues to hold 21% of the shares of the McLaren group.

For timepiece aficionado’s, the developments that matter are in the Swiss Watch business. The company was founded in 1860 in St. Imier, Switzerland. It patented its first chronograph design in 1882 and by 1887 it invented the oscillating pinion, a component still used in most mechanical chronographs.

Moving in to the 20th century the business continued to progress and finesse its range of chronographs. By 1911, the company had, like many other Swiss businesses, passed on to another generation of craftsman.

It was this year that Charles-Auguste, the son of the found Edouard received a patent for his ‘Time of Trip’ the first dashboard mounted chronograph. The device, designed for use in aeroplanes and cars featured both the time and a second set of hands to monitor the duration of the journey. The company finessed these lines over the next few years, by the late 1930’s timing systems were being manufactured for the Luftwaffe, the German Air force.

Wristwatches were always part of the mix for the firm, but following the Second World War, the familiar business model of the modern TAG Heuer watches began to come to the fore. Many of the new lines offered by TAG Heuer watches were wrist chronographs. However, the late 1950’s brought a new line of timers for use on car dashboards, such as the Monte Carlo, and Auto-Rallye 60 minutes stopwatch.

From the 1950s to the 1970s, the brand was popular watches among automobile racers. As a leading producer of stopwatches and timing equipment it was only natural that racers, their crews and event sponsors began to wear the same brand on their arm. Special versions were produced with logos of the Indianapolis Motor Speedway, as well as the names or logos of racing teams or sponsors. The watches where also the first to be used in space when in 1962, astronaut John Glenn wore a stopwatch made by the firm onboard the Mercury Atlas 6 spacecraft.

In 1969 engineers at TAG Heuer introduced the world’s first Automatic Chronographs. Today the company is part of the LVMH group of luxury goods concerns, but it remains true to its engineering roots and continues to innovate with modern watches such as the high precision Carrera Mikrograph which used high-frequency operation to produce stop watches accurate to 1/100 of a second within its compact form. This was bettered in 2011 when the Mikrometer Flying 1000, capable of 1/1000 of a second accuracy. In January 2012 the company introduced the Microgirder model, accurate to 5/10,000th of a second. With the pace of innovation quickening the company is sure to build on its trophy case full of awards.